Earlier this year Interrailing Packages went on the hunt for their first ever travel blogger – launching a nationwide, social media competition to find someone willing to sacrifice three whole weeks of their lives to undertake an epic Interrail adventure across Europe. Who on earth would want to do that right?

Well, quite a few of you apparently, and selected at random was our winner, 21-year-old Birmingham lass, Tara O’Connell.

No stranger to Interrailing, the trip would actually be Tara’s second time Interrailing – although of course this time she had the advantage of being able to enjoy a free, dream trip to the European destinations of her choosing. She brought her fella, Jack Thompson, along with her for the journey. And what a journey it was!

We spoke to Tara – who shared her September trip on Instagram as she went – to find out how it went, as well as get some recommendations and travel tips along the way.

“It all started at 6am in rainy Manchester,” recalled Tara. “I jumped on my flight and was at Dubrovnik, gazing over the Adriatic Sea in no time.”

Situated in southern Croatia, the walled city of Dubrovnik is fronted by the sparking blue Adriatic and is quickly becoming a Mediterranean mecca for Interrailers chasing the sun, as well as on the hunt for history, culture and some fun. With its magnificent Old Town, its stunning architecture and beaches, it offers a little bit of everything – no wonder productions like Game of Thrones and Star Wars have filmed here.

In fact, Tara claims she fell in love with the place – though maybe that had something to do with the cocktails, served in reworked colourful bathtubs at Mama Mias, as well as the breathtaking scenery – and, of course, those beaches.

“Whilst in Dubrovnik we explored the Old Town and hopped on the ferry to Lokrum Island. Visiting these places is a MUST in Dubrovnik! You can do each in one day, ” advised Tara.

“After three days our time was up and we caught a bus which drove along the Dalmatian Coast, bringing us to Split [Croatia’s second largest city, also known for its beaches and the magnificent Diocletian’s Palace complex at its centre].

“Split is full of cocktail bars, palm trees and gigantic tubs of ice-cream being sold everywhere! We wandered around the Palace of Diocletian, it’s been converted into loads of restaurants and market stalls – to my surprise! I felt like a princess walking around the palace!” said Tara.

While in Split, the couple decided to visit nearby Krka National Park, which is situated along the Krka River in southern Croatia, and boasts seven stunning waterfalls as well as lakes perfect for swimming. 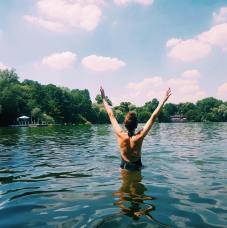 “This place is brimming with tourists, it was super crowded!” said Tara. “I’d suggest going really early to beat the bustle. A lot of companies try to

sell overpriced travel there, but if you book it for yourself online it’s a fraction of the price!”

Following Split, Tara and Jack headed on a ferry to the Croatian island resort of Hvar – a perfect destination for sun chasers, as well as any culture vultures.

“Hvar is so tropical, if you sit at the harbour you will see mega yachts at the bay and colourful islands across the waters. Hvar was definitely one of my favourite places. I can’t wait to go back!”said Tara.

“The island is full of things to do, such as visiting the Paklinski Islands, walking up to the castle or taking a wine tasting tour. After a few action packed days, it was time for our overnight ferry to Florence.”

However, before the intrepid duo could get to their destination – they first had to experience the ferry! “From the outside the ferry looked normal,” laughed Tara. “However when we got inside it was like stepping into the 70s! Red carpets and strange wall paintings – it was an experience in itself! Luckily I can easily fall asleep, so I nodded off in my below deck cabin and woke up 14 hours later in Italy.”

Their next destination was Florence, the capital city of Tuscany in Italy, and renowned for being home to  many masterpieces of Renaissance art and architecture. After arriving in the city, Tara and Jack threw themselves into some typical tourist entertainment – visiting the Basilica of Saint Mary and admiring some real life Leonardo da Vinci and Michelangelo paintings at the famous Uffizi Gallery – as well as enjoying some rather delicious Italian food and wine.

They also took a walk out of the city too – visiting a quaint little village called Santa Croce and enjoying a local restaurant which served wine straight from the barrel at just two euros a glass.

Next up was the train to La Spezia, a port town in northern Italy and a gateway to Cinque Terre, a string of beautiful centuries-old seaside villages dotted along the Italian Riviera coast. 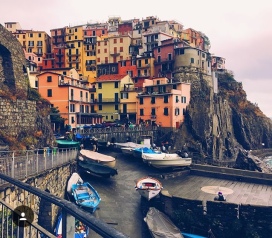 “The train was around 2.5 hours, which gave us time to catch up on emails and nap,”recalled Tara, who added that despite the stormy weather on the day of their trip to Cinque Terra (when they took in all five villages – phew), they still had an amazing time.

Next up was Milan, that global capital of fashion and design (Tara noted that even the McDonalds staff managed to make their unifoms look stylish so hip was the city). Then Nice, sandwiched between the glamorous cities of Cannes and Monaco on the French Riviera. It was, as Tara expected, rather on the expensive side… 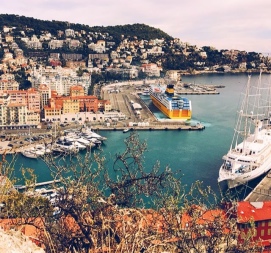 “If I had to choose, I would say Nice was my least favourite location, ” mused Tara. “As someone who loves being cash savvy, it’s almost impossible there! I’m not surprised it’s been called the ‘millionaires playground’. I’d go back to the French Riviera, but you have to be armed with plenty of euros! 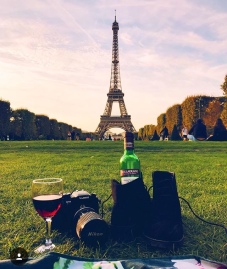 “Last but not least, we arrived in Paris! We got a five hour train from Nice, then hopped on the metro to La Fourche. Our hotel was in the suburbs, but jumping on the metro was no problem for us.

“We saved some euros by making lunch at home in most places and Paris was no different. We made our way to the Eiffel tower loaded with picnic goodies and spent our last days living like locals.”

Reflecting on her trip, Tara said that Hvar and Paris were highlights of the trip, though of course each destination brought with it its own experiences and memories.

“I’d say everyone should interrail at least once in their life, at any age! Being able to immerse yourself into multiple cities lets you tick so much off your bucket list and have an absolute blast whilst doing it,” she advised with a smile. I don’t doubt Tara will be off on another adventure soon!